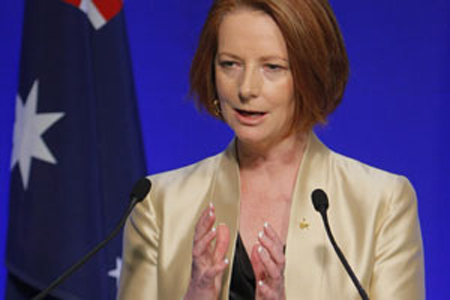 Two of the nation’s most experienced diplomats have also warned Labor that the row over 457 temporary migration visas is undermining its Asian Century strategy.

The warnings came as the Prime Minister stepped up her rhetoric, attacking the Howard government for failing to train enough Australians in the health system, forcing the sector to be “so reliant on 457 visa holders”.

Asked to comment on criticism from the resources sector that her attitude to 457 visas was “pathetic and bordering on xenophobic”, Ms Gillard said: “We are dealing with a simple issue here, and a very important issue. I want to see Australian workers put first. Full stop. That’s it.”

The Australian understands the government is examining strengthening inspections of companies using workers on 457 visas but no decisions have been made. The inspections would be likely to use the government’s Fair Work Australia regime, with the Fair Work Ombudsman already charged with examining complaints relating to 457 visas.

As Wayne Swan supported the Prime Minister’s position, other Labor MPs expressed concern about the policy and said it was designed to deflect anger at the government over the influx of asylum-seekers.

Former prime minister Kevin Rudd used a speech in Adelaide yesterday to praise Australia’s history of successful immigration, saying successive intakes of migrants had strengthened the nation and contributed to the nation’s foreign policy clout in the region.

“We actually have something uniquely precious here,” Mr Rudd said at an interfaith rally in Adelaide’s northern suburbs. “I think one of the great hidden strengths of Australia is our embrace of diversity.”

Mr Rudd will today address a forum on population growth for a strong economy in Melbourne.

Mr Woolcott, who was hand-picked by Mr Rudd to promote his Asia Pacific Community and who headed DFAT during the creation of the APEC regional body, said yesterday: “There’s a tendency to interpret this (457 visa) issue along with the asylum-seekers and refugees (issues) so they have undertones of religious intolerance and racism.

“I think it’s not necessarily helpful, as is much of our domestic politics, in consolidating the very necessary strengthening of our relationship with the major countries of Asia,” he said.

It says the temporary skilled migration program, using 457 visas, was demand driven, “making it highly responsive to economic conditions, while strong oversight of the program and minimum training benchmarks for sponsors preserves the work and skills opportunities for Australians”.

Dr Emerson said the government had introduced a “significant investor” visa category for business migrants with more than $5 million to invest in Australia, and had received strong interest from Asian investors.

Speaking ahead of Ms Gillard’s visit to China early next month, Mr Raby said Australia needed to match its aspirations to deepen engagement with the region with real actions and he warned that the heated rhetoric on foreign workers suggested Australia did not care about Asia. “This sort of debate plays heavily into the views into this part of the world, and particularly China, that we are ambivalent with our relations with the region,” he told The Australian.

“We don’t have a clearly articulated view repeated over and over again by Australia’s political and business leadership about how we see ourselves further integrating in Asia. And it needs to be matched by action, including by maintaining high-level visits and contacts to maintain relationships.”

Senior Labor sources concede the asylum-seeker issue had been a major negative for the party since John Howard stopped the Tampa landing asylum-seekers on Australian territory in 2001.

Ms Gillard, who on Sunday said she had a plan “to stop foreign workers being put at the front of the queue with Australian workers at the back”, has reversed Labor’s rhetoric over the past 12 months.

In the middle of last year, senior ministers including then immigration minister Chris Bowen, Special Minister of State Gary Gray and Resources Minister Martin Ferguson also backed the 457 regime, arguing they were complementing rather than competing with the domestic labour force.

Australian Chamber of Commerce and Industry economics director Greg Evans said yesterday the inflammation of the debate about 457 visas did not play well with Australia’s Asian neighbours nor foster the kind of economic engagement contemplated in the Asian White Paper.

Ai Group chief executive Innes Willox said the 457 debate was “unfairly demonising companies that are compelled to use skilled foreign labour” and risked running completely off the rails.

“This debate should be paused to allow some facts to be injected. No systemic rorting of the system has been uncovered. Only three companies have been prosecuted for misusing the system since 2009.”

He said there were currently about 100,000 primary 457 visa-holders – about the same as before the global financial crisis. No evidence had been produced of 457 visas creating any real downward pressure on wages.

“The skilled migration system is too important to the Australian economy to be dragged into the broader immigration debate. It is giving an unwelcome platform to xenophobes and zealots opposed to immigration in any form,” Mr Willox said.

Immigration Minister Brendan O’Connor said yesterday there was a decrease in wages where there had been “a saturation of 457s in the given occupation”. He has asked his department for further information on the issue.

Mr O’Connor said there had been a “significant spike in abuse which will lead to the undermining of the confidence in the temporary skilled migration scheme. That is a problem, and that’s why we need to attend to it”.

He said there had been a higher level of complaints by local workers about missing out on jobs to Fair Work Australia.

Mr O’Connor said the 457 visa system, when used properly, was a “very good vehicle to respond to skill shortages, but when used improperly it is displacing local workers, and that’s not on”.

Why China is still clinging to coal