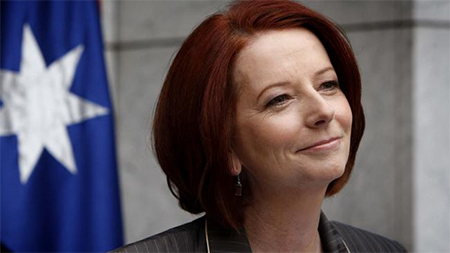 Australian Prime Minister Julia Gillard has declared that Australia can grow its relationship with China while “tending” to its friendship with the US, playing down tensions caused by an agreement to allow US marines to exercise near Darwin.

She seems to have totally disregarded threats made by China against Australia, particularly a warning in May 2012 that Australia must choose between China and America as their protecting “godfather.” China made it very clear that Australia could not choose both. (Chinese official tells Australia: it’s us or America)

Speaking before a major visit to China, the Prime Minister said the stationing of marines in Darwin was “not news” to China and Australia could balance its relationship between the Asian superpower and the US. The Prime Minister seems to mistakenly believe China is a superpower.

She said that on security perspectives, Australia did not believe in a containment policy in relation to China and that was not the US outlook either.

In a wide-ranging question and answer session at the Foreign Correspondents Association in Sydney yesterday, Ms Gillard also declared that Australia would continue to run a “sizeable” migration program with a focus on skilled migrants.

But she did not believe in setting population targets. “We will continue in the years to come, in my view, to be a nation that welcomes migrants and particularly welcomes skilled migrants, and we continue to operate quite a sizeable immigration program.”

She also predicted the National Broadband Network would allow for more “diffuse settlement patterns” for migrants in contrast to the previous experience of migrants coming to the biggest cities and settling in one part of those cities.

Ms Gillard said she would be leading the most senior Australian political delegation to visit China. It will include Trade Minister Craig Emerson, who also has carriage of Asian Century policy, Foreign Minister Bob Carr and Financial Services Minister Bill Shorten, who heads to a financial forum in China at the same time.

Ms Gillard is due to arrive in China tonight for a six-day visit. She will be the first major Western leader to meet the new Chinese leadership, including President Xi Jinping at the weekend and Premier Li Keqiang in Bejing on Tuesday.

The visit is likely to canvass a range of topics including Chinese investment in Australia, deepening currency links between China and Australia, defence and the North Korean situation.

“I’ll be promoting our trade and economic interests and sharing perspectives on global and regional economic and security challenges,” Ms Gillard told the association.

She said discussions would continue on a bilateral free trade agreement with China as well as Japan but the government would have liked to have seen more progress on the Doha trade round.

On asylum-seekers, Ms Gillard denied the government was appealing to the “racists” in the suburbs on refugee policy, arguing the only thing it was about was deterring people from risking their lives by getting on boats and combating people-smuggling.

She said she was not just going to celebrate the existing strong relationship with China and its underpinnings, but “to look ahead to how we can build the comprehensive relationship envisioned in our Asian Century white paper, including how leaders can help deliver a relationship of greater depth and durability in a more complex future”.