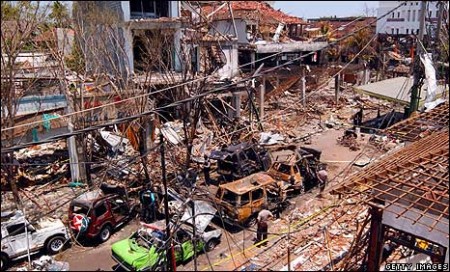 On October 12th 2002, three bombings shattered the peace in the town of Kuta on the Indonesian island of Bali.

The blasts, the work of militant Islamist terrorists, left 202 people dead, including 88 Australians, and more than 200 others injured, many with severe burns.

The attacks shocked residents and those familiar with the mostly Hindu island, long known as a tranquil and friendly island paradise.

The most deadly of the three blasts occurred when a large bomb, estimated to be about 1,200 kilograms, was detonated in a van outside the town at the Sari Club nightclub.

The explosion left a large crater in the ground and was said to have blown the windows out of buildings throughout the town.

Many of those killed and injured in the blast were young visitors vacationing on the island, most from Australia. Thirty-eight Indonesians, mainly Balinese, were killed.

Two other bombs were also detonated that day: one, packed in a backpack, was detonated in a bar and another was exploded in the street in front of the American consulate.

All three were thought to be the work of the regional militant Islamist group Jemaah Islamiah, which is believed to have links to al-Qaida.

Jemaah Islamiah is also alleged to be responsible for the bombing of a Marriott hotel in Jakarta in 2003 and the Australian embassy to Indonesia in 2004, as well as the suicide bombing of three restaurants in Bali on October 1, 2005.

The second attack on Bali killed 22 people, including the bombers, and injured more than 100 others.

Indonesia is the world’s most populous Muslim nation.