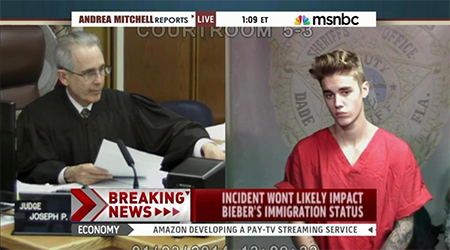 A court in Canada has ordered teen pop sensation Justin Bieber to stop making music for the next three years as restitution for a recent assault charge.

In a plea deal with the prosecution today, 19-year-old Bieber agreed to refrain from touring or recording new material in exchange for keeping himself out of jail.

The singer had faced up to three months in prison after a Dec. 30 altercation in Toronto in which he hit a limousine driver on the back of the head repeatedly.

The highly unusual deal was conceived by Crown Attorney John Samson, a young prosecutor who is known for his maverick style and who is reportedly not a fan of Bieber’s music.

“Normally we sentence people to clean up trash on the freeway or serve food in soup kitchens,” Samson explains. “But when this came across my desk I knew it was a once in a lifetime opportunity.

“We made it very clear to Justin’s lawyers that we would pursue the assault charge vigorously and that our case would affect his immigration status in the United States. All we asked for in return for dropping the charges was a hiatus on the singing. And we got it. We’re thrilled.

“I can’t think of a bigger community service Justin Bieber could perform than to stop making music. It’s terrible. We all know it’s terrible. And now finally someone has done something about it.”