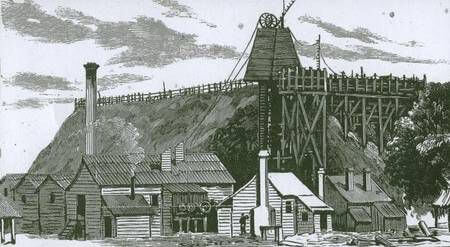 Creswick is a small town located in the heart of the central goldfields in Victoria, Australia.

The town, which currently has a population of just over 3 000, was born after squatters Charles, John and Henry Creswick ran sheep in the area which became known as Creswick’s Creek in 1842.

The discovery of gold in September 1851 led to a gold rush, and the steady alluvial finds were boosted by the opening up of deeper workings in 1855-6. By 1861, the population of the town had swelled to over 5 000.

The Australasian Mining Company began prospecting for gold in the area in 1867, and enjoyed rich returns with the discovery of the Australasian Lead, one of five rich gold leads, or rivers of gold buried beneath layers of basalt, sand and gravel, that run through the area.

A decade of regular flooding caused the Australasia No 1 mine shaft to be abandoned. The Australasia No 2 shaft was sunk approximately 200 metres away after the formation of a new company, the New Australasian Gold Mining Company, in 1878.

At around 5:30 am on the morning of Tuesday, 12 December 1882, water which had been accumulating in the Australasia No 1 mine burst through the wall of the reef drive, trapping 27 workers.

Hearing the noise of the flooding above ground, water pump engine driver James Spargo increased the speed of the pump, and was quickly joined by two other engine drivers, James Harris and Thomas Clough.

Over the next few days, the men ran the engines at more than 10 times their normal speed, trying to lower the water to save the trapped men.

Unable to escape from the mine, the men sought respite from the rising waters in the small space of the No 11 jump-up, one of several cutaways where the men would “jump up” out of the way of the mine trucks.

A special train was dispatched from Melbourne with equipment to dive into the water. Diving equipment borrowed from the HMS Cerberus, together with experienced divers, was sent up from Melbourne.

It was Thursday (some sources say Friday) before the trapped men could be reached, and by that time, 22 had died. Only 5 were brought out alive.

This was not the only mining accident to occur in 1882: apart from the 22 who perished in this one incident, in the same year there were another 49 deaths due to mining accidents in the colony of Victoria alone.

Following the Creswick disaster, 20 000 pounds was collected from townsfolk throughout Victoria to help the widows and orphans, with funds being allocated weekly to the families of the victims.

Later, Parliament changed the fund to “The Mining Accident Relief Fund Act, 1884”, with moneys being paid to assist all victims of mining accidents.