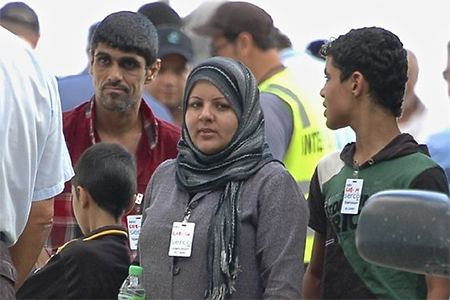 Jakarta has signalled its reluctance to embrace a key plank of Tony Abbott‘s asylum-seeker policy, with the Indonesian Foreign Minister criticising the plan to pay villagers for information about people-smugglers, saying it risked undermining his nation’s sovereignty.

In a day of tension between Australia and its nearest neighbour, a policy row also erupted over foreign investment in agricultural land after Nationals frontbencher Barnaby Joyce vowed to whip up a public campaign against an Indonesian government plan to buy controlling interests in up to 1.5 million hectares of northern cattle land.

The Indonesian land acquisition project has been largely welcomed by northern graziers, but Mr Joyce, widely tipped to become agriculture minister, yesterday described the proposal as against the national interest and called on the public to “start making a big noise” to persuade his own incoming government to reject it.

Mr Joyce later told The Australian: “We’ve got to see the details of it first but in principle, I am concerned.”

As Tony Abbott prepares to meet Indonesian President Susilo Bambang Yudhoyono before the APEC meeting early next month, Foreign Minister Marty Natalegawa highlighted his concerns about aspects of the Coalition’s people-smuggling agenda and rejected key elements of a proposed $20 million community program to disrupt people-smuggling because it undermined Indonesia’s sovereignty.

In remarks to the national parliament published yesterday, Dr Natalegawa specifically rejected Australian-directed “early-detection” activities in coastal communities and the controversial proposal to buy Indonesian fishing boats to keep them out of smugglers’ hand.

“Hopefully in the next couple of days when we start communicating, we can find out their exact policies,” Dr Natalegawa told the parliamentary foreign affairs commission, where feeling was already running high against Coalition policy.

“But for sure we will reject policies not in line with the spirit of partnership and (Indonesian) sovereignty and national integrity.”

The Coalition’s policies for curbing asylum-seeker flows and Indonesia’s for securing beef and cattle supplies from Australia are the most sensitive issues in the current relationship and risk stirring public antagonism in both countries.

The new Australian asylum-seeker policies were already shaping as the critical issue at the yet-to-be-finalised leaders’ meeting, likely the week after next. Mr Abbott is hoping his early visit will calm the Yudhoyono administration’s anxieties.

The diplomatic tussle over asylum-seeker policy came after border protection authorities intercepted a fishing boat carrying 74 passengers and two crew, north of Christmas Island late Wednesday. The arrival of the boat is evidence smugglers are seeking to test the resolve of the new government, which has made stopping the asylum boats a key priority.

So far this year 19,222 asylum-seekers have arrived by boat, 3391 since the Rudd government announced its Papua New Guinea resettlement deal in July.

The Indonesian Foreign Ministry spokesman did not respond yesterday to questions from The Australian about Dr Natalegawa’s statement.

Liberal foreign minister-in-waiting Julie Bishop said policy discussions would be conducted “face-to-face”, not through the media. “The Coalition will discuss and, where appropriate, negotiate all aspects of our border protection policies during formal bilateral meetings with Indonesian officials in coming weeks and months,” Ms Bishop said.

A spokeswoman for Labor’s acting caretaker foreign minister, Tanya Plibersek, blamed the dispute on Mr Abbott’s policies. “Less than a week in and already a significant foreign policy embarrassment for Tony Abbott,” the spokeswoman said.

Earlier in the day, Mr Joyce responded hotly to a report that Indonesia’s State Owned Enterprises Minister Dahlan Iskan had authorised two government corporations to seek one million hectares of northern grazing land to raise cattle for the Indonesian market.

Mr Dahlan later told The Australian he had authorised the acquisition of up to 1.5 million hectares of grazing property, by buying majority stakes in existing agricultural companies.

Mr Joyce appeared to step back from his earlier comments to The Guardian’s website that he saw no possible national interest in the Indonesian acquisitions and that “the public really need to start making a noise about it because they don’t believe me in Canberra that this is a real issue out here”.

Mr Joyce toned down his comments about the proposal, while continuing to deny that his objection to foreign acquisitions of agricultural land was xenophobic.

“We have to move away from this idea that if you say ‘no’ to one (foreign purchase) the exception becomes the generality and that you are parochial, a bigot, xenophobic,” he said.

The former senator from Queensland, who won the lower house NSW seat of New England, said his concern was the Foreign Investment Review Board had never rejected an offshore purchase of an Australian farm or agribusiness.

“Not every deal is in the national interest,” he said.

The northern live-cattle trade is beginning to recover from a crippling series of events starting with the Indonesians’ move to restrict imports to foster their own beef industry, the Gillard government’s suspending exports over allegations of cruel practices in Indonesian slaughterhouses, and further quota reductions by the Indonesians in retaliation.

With the Indonesian government acknowledging failure of its beef self-sufficiency drive, Jakarta has announced its intention to end quota restrictions and, for the rest of this year, allow the import of higher volumes of Australian cattle.

However Mr Dahlan said yesterday the government believed the viable long-term answer to the beef supply problem was for Indonesia to own majority shares in northern Australian cattle production and to “finish” the cattle in Indonesian feedlots.

“It doesn’t need a cabinet decision; the authority is in my hands totally,” he said.

Source: The Australian – Indonesia’s challenge for Libs over boats and cattle

General Manager at Craig Hill Training Services * Get an Australian diploma by studying in your own country * Get an Australian diploma using your overseas study and work experience * Diplomas can be used for work or study in Australia and other countries. * For more information go to www.craighill.net
View all posts by Craig Hill »
« Australia risks losing specialist teachers in English, maths, history and other subjects
Australian man may be suicide bomber in Syria »