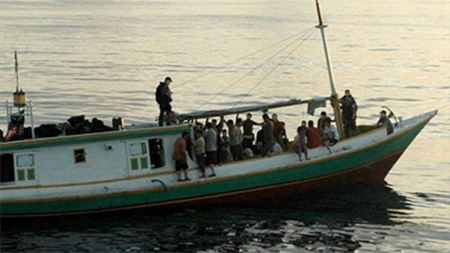 Australian Federal Police Assistant Commissioner Steve Lancaster made the announcement on Thursday after a series of raids across the country.

The AFP has described it as Australia’s largest ever people smuggling strike.

Mr Lancaster says four of the five people – three Afghans, one Iranian and one Pakistani – came to Australia on boats themselves.

They belonged to syndicates that were collectively responsible for 132 boats reaching Australia, he said.

He says the AFP has about 20 people-smuggling investigations underway.

‘Those who have not been picked up in the first scoop today, that does not mean you should sleep well tonight,’ he told reporters in Canberra.