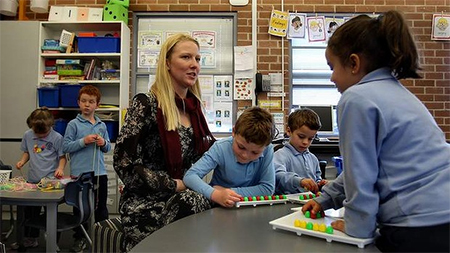 The NSW government will also introduce paid teaching cadetships for high-achieving students and will give new teachers additional time out of the classroom to develop their professional skills.

The measures are the latest changes to come out of the NSW government’s Great Teaching, Inspired Learning review, which aims to lift teacher standards and has already resulted in a statewide HSC benchmark for students enrolling in teaching courses.

Mr Piccoli said the government would pursue stricter new procedures for managing state school teachers who are not meeting performance standards in coming industrial negotiations with the union, with the aim of halving the time it can take to dismiss them from 25 to 12 weeks.

Greater powers will also be given to principals to sack teachers who repeatedly engage in minor poor conduct, such as lateness or not performing tasks like playground duty, from term 4 of this year, while all teachers will have to undergo an annual performance review based on a national framework from 2015.

”There are those who need some additional assistance to be the best that they can, and we’ll provide that assistance,” Mr Piccoli said.

”But those that can’t meet the standard, even with additional assistance, we will have a system in place to move them out of the teaching profession.”

Mr Piccoli said he wanted to see pay rises linked more closely with meeting professional standards, not just time in employment, as part of the reforms he described as more of a ”private sector approach to performance management”.

Last year, just 13 school teachers out of a permanent workforce of about 50,000 were found to be ”inefficient” and were dismissed or allowed to resign.

The NSW Teachers Federation would not comment before negotiations but is understood to broadly support performance benchmarking provided the union considers it is applied fairly.

From next year, the amount of time new teachers at schools will receive for professional development will triple – from one hour a week to two hours in the first year, plus one hour in their second year of a permanent placement.

New paid cadetships and internships for high-achieving HSC students will also be created, placing students in schools as paraprofessionals.

Opposition education spokeswoman Carmel Tebbutt said it would take more than the $155 million over four years allocated by the state government so far to implement the reforms.

Claire Lennox (pictured), a kindergarten teacher at St Michael’s Catholic Primary School at Stanmore who has been in the profession for two years, said the additional release time for professional development would be greatly beneficial.‘‘A lot of what you do in those early years is building your resources and building your programs, and things like that,’’ she said. ‘‘So having extra time off face-to-face would allow beginning teachers to establish themselves and how they build their programs and make resources for the children.”