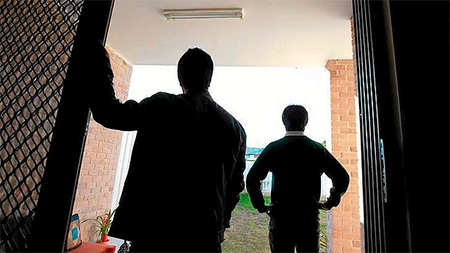 Teenage refugees joining the so-called queue in Indonesia to apply officially for protection visas, instead of jumping on a boat, say they are being told Australia will not take them until they are 18 years old.

The boys, who are stuck in limbo in Jakarta, said that even though they have been determined to be refugees and did the right thing by applying through the United Nations High Commissioner for Refugees (UNHCR), they were told they would not be considered or their applications would be delayed until they are considered adults. Alternatively, they could apply to go to another country, including the US.

A 14-year-old Hazara boy, who already survived a boat sinking in April, said he was living in a shelter for unaccompanied minors in a suburb in Jakarta.

The boy, who asked not to be named, said the advice was one of the reasons why there is such a high number of unaccompanied children arriving on boats. He said the alternative was to live for years in a shelter with little support, no money and no chance of going to school or working.

Another boy said he had been in Indonesia for seven months already and he had been told he would have to wait for another five months before he will even be interviewed by the UNHCR to determine if he is a refugee. He said he was told that there are not enough resources in Indonesia to cope and it is not unusual for a first interview to take a year or more.

Others who were teenagers at the time they applied, and have since arrived in Australia, said their applications were delayed until they were old enough.

Immigration Minister Tony Burke said that in his decisions and in discussions with his department about this year’s humanitarian intake, ”providing a home for unaccompanied minors who have registered with the UNHCR has always been part of any option”.

An Immigration Department spokesman said Australia tries to discourage parents from sending their children on a dangerous journey to Australia ”to act as an anchor” for families’ subsequent migration to Australia.

He said the Australian government balances its international obligations towards asylum seeker children with its ability to offer resettlement to people who are found to be refugees offshore by the UNHCR.

He said that Australia resettles refugees of all ages and, this year, Australia piloted an approach to resettle a small number of minors from Indonesia, who had been identified as refugees by the UNHCR and were suitable for placement in youth group housing.

Many carers waiting to give children a home

It is called a group home, a plain house in the suburbs, with nothing to distinguish it from others. It is modestly furnished with basic appliances, cheap linen and furniture bought on eBay.

The under-age teenage boys who live there are much like any others their age and they seem to get along well. There are none of the trappings of what you might expect in the home of Australian teenagers.

Fairfax Media was given a glimpse inside one of the many homes around the country that have been leased to provide community housing for under-age asylum seekers.

The carer who lives with them says they are grateful to have their own rooms and some freedoms.

Ali (not his real name), talks about how happy he is just to live normally again. Detention had made him feel like ”half a person”, he said.

Despite the efforts of Immigration Minister Tony Burke, who has made getting children out of detention a priority, there are still hundreds of unaccompanied minors and families with children in closed detention centres. Greens Senator Sarah Hanson-Young said it was clear that community housing is much healthier for children.

More than 500 children, including 116 unaccompanied minors, have been released in the past six weeks, but agencies that care for them say many government-funded places have still not been filled. Homes, beds and carers are ready and they cannot understand the hold-up.

There are 391 unaccompanied minors in community detention and 503 in closed detention.