Australia to have referendum to recognise Aboriginals 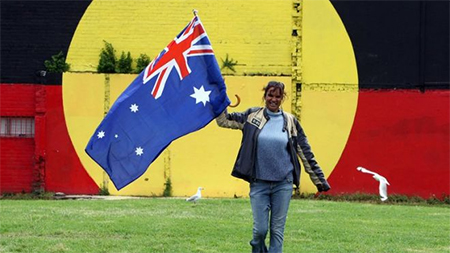 Australian Prime Minister Kevin Rudd on Wednesday used the 50th anniversary of the indigenous land rights movement to pledge a referendum on recognising the country’s Aborigines in the constitution if Labor is re-elected.

His predecessor Julia Gillard shelved a plan to hold a vote this parliamentary term, citing low public support, but Rudd made clear that recognition of Aboriginal people as the country’s first inhabitants was a priority.

“I therefore, as prime minister, want to see this matter brought to the people of Australia by referendum within two years of the election of the next parliament,” he said, with national polls scheduled for later this year.

Rudd said he wanted to work with the conservative Tony Abbott-led opposition to draft an appropriate question.

“I want us to agree on the question to be put to the Australian people,” he told reporters.

“No more delays, no more excuses, no more buck-passing. It’s time the nation got on with this business. That is my commitment to you.”

Any change to Australia‘s constitution must be approved by a national referendum in which all citizens vote, and such ballots typically have low levels of success.

Rudd was speaking ahead of an event in the remote Aboriginal community of Yirrkala in the country’s north, where the indigenous land rights movement began 50 years ago with the signing of two bark petitions protesting against a government plan to confiscate a massive block of land to mine for bauxite.

The petitions asserted that the Yolngu people owned the land, and became the first traditional native title documents recognised by the Australian parliament.

While they failed to win their case in the courts, the petitions set in motion the push for the eventual recognition of Aboriginals as full citizens in 1967, and the statutory acknowledgement of land rights in 1976.

“Eight hundred years ago we had (the) Magna Carta; 800 years later, the Yirrkala bark petitions.

“These bark petitions are Magna Carta for the indigenous peoples of this land. Both (are) an assertion of rights against the crown and both therefore profound symbols of justice for all peoples everywhere.”

The 1215 Magna Carta was one of the founding documents of the British legal system, setting out a charter of liberties for the King’s subjects and requiring that he and all future sovereigns abide by a rule of law.

Aborigines are the most disadvantaged Australians, with indigenous children twice as likely to die before their fifth birthday as other children and Aboriginal men estimated to die 11.5 years earlier than other males.

They are believed to have numbered around one million at the time of British settlement in 1788, but there are now just 470,000 out of a total population of 23 million in Australia.

The move came five years after Rudd, then serving his first term as prime minister, made an historic apology to Aborigines for wrongs committed since the arrival of British settlers, including the forced removals of children from their parents.

General Manager at Craig Hill Training Services * Get an Australian diploma by studying in your own country * Get an Australian diploma using your overseas study and work experience * Diplomas can be used for work or study in Australia and other countries. * For more information go to www.craighill.net
View all posts by Craig Hill »
« Australia’s links to US spy web revealed by Edward Snowden
Japan attacks Australia’s kangaroo culling to justify Tokyo’s whaling program »

5 thoughts on “Australia to have referendum to recognise Aboriginals”

Why China is still clinging to coal