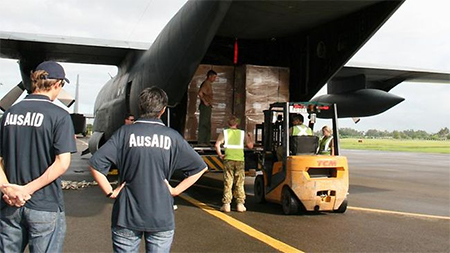 Foreign aid spending remains the biggest issue for the Asia-Pacific region in the wake of Tuesday’s Australian budget.

The budget delivers big social benefits for schools and the disabled, but hits foreign aid and experts say delivers little for some parts of the region.

Disability Care will get $14.3 billion over the next seven years, and there’s confirmation of the previously announced increase to the Medicare Levy from July 2014.

There’s $9.8 billion in funding over six years for the school reforms, some from previously announced savings in the higher education budget.

There is also $3 billion in funding for roads, rail and ports.

“It’s a huge change for Australia – we know from the Asian Century White Paper and other reports that we’re falling behind when it comes to the education race,” he said.

The detail of the additional delay to reaching the foreign aid spending target was released on Monday to soften the blow.

The target date to reach 0.5 per cent of gross national income has been delayed by a year to 2017-18, a measure that is expected to save $1.9 billion over the forward estimates.

$750 million in aid is now being diverted to pay for onshore asylum seekers costs.

Professor Stephen Howes from the Australian National University says aid money is still increasing, but not by as much as promised, which he says is the best outcome in the current economic environment.

“It is big win for the aid program because it is a 10 per cent increase, or half-a-billion dollars,” he said.

“That’s a big increase in a tough fiscal environment.”

But Professor Howes is concerned about the longer term picture.

“The aid program has some serious problems because there’s so much uncertainty about future targets,” he said.

“Clearly that .5 target is no longer credible, because it’s been delayed twice and the opposition has refused to give it a date.

“So it’s very hard to plan an aid program if you don’t know what your funding is going to be in the next few years.”

Aid groups remain disappointed about the delays and diversion to foreign aid.

Marc Purcell, from the Australian Council for International Development, says the two years of savings is too much.

“Over the forward estimates, two years in a row there’s a total of $4.8 billion has been taken from the Australian aid program,” he said.

“Additionally, the government said that $375 million was going to be taken for domestic costs for asylum-seekers in Australia – this is money that would never reach poor people overseas.

“Over the forward estimates [it’s] a billion dollars worth of aid that will never reach poor people overseas, it’s actually going to be spent inside Australia.”

The estimated outcome for Indonesia is $540 million and Professor Stephen Howes says the aid will go up $650 million next year.

“The government had indicated that it planned to scale up the Indonesia program, so it’s consistent with that,” he said.

“But it is a sharp jump, and it seems to be spread across the program – the budget refers to improving health and education outcomes, justice and governance.

“So it seems to be a boost for the aid program in general, rather than for one specific activity.”

Professor Howes says there were initial concerns the money diverted to asylum-seeker processing would come at the expense of country programs in the Pacific and elsewhere.

He says it appears that funding is instead being drawn from general humanitarian support, rather than affecting the country programs.

“The Pacific didn’t take a hit really in this current year,” he said.

“On the other hand, if you look at the next year…there’s no real increase in it for the Pacific either.

The Parliamentary Secretary for Pacific Island Affairs, Matt Thistlethwaite, says he’s proud of what the budget delivers for the Pacific.

“In a climate where most Western developed nations are reducing their aid budget, Australia stands out for a beacon of development – particularly in the Pacific,” he said.

“A number of Pacific nations are struggling to meet their Millennium Development Goals, so we’re prioritising funding to assisting those nations to meet those goals.”

Almost half a billion dollars is going towards the transition of the Regional Assistance Mission to Solomon Islands, RAMSI – although only some of the money is new.

Australian Defence personnel are still on track to pull out later this year, but the transition money will go to improve Solomon Islands’ governance.

The budget says that the number of asylum seeker boat arrivals will increase next year.

There has already been more than 120 boats this years, carrying more than 800 people.

The government is spending $2.9 billion housing asylum seekers and Australia’s migration program will be maintained at 190,000 places.

The government is also doubling the application charge for the controversial 457 skilled foreign worker visa scheme to $900, to raise $200 million.

The Government will spend an extra $3.4 million dollars on compliance, amid claims of widespread rorts.