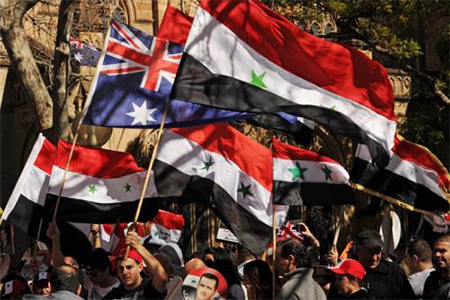 The rising risk posed by Australians returning from the battlegrounds of Syria has forced NSW police to increase their operational intelligence-gathering and community engagement programs to counter the threat.

The chief of the NSW Police Counter Terrorism Command, assistant commissioner Peter Dein, said yesterday authorities were disturbed about a “large number” of individuals suspected of involvement in the conflict.

While emphasising that none posed a known threat to the community, Mr Dein said the two-year-old civil war had caused a great deal of interest among the Muslim communities of Sydney.

Repeating the recent warning of ASIO director-general David Irvine that hundreds of Australians were suspected of taking part in the conflict, Mr Dein said: “There is an increased number of people going overseas to places like Syria. Syria, in particular, is a focus because of the conflict that’s occurring there and the potential for that conflict to impact on community attitudes back here.”

It was reported about 100 Australian dual nationals are suspected of fighting with the al-Nusra Front, al Qa’ida‘s affiliate in Syria.

It is understood the Australian government is moving to include al-Nusra on the list of banned terrorist groups, which would strengthen the hand of police looking to prosecute Australians who fight in Syria.

Mr Dein declined to say whether the NSW police had any active inquiries under way into combatants returning from Syria, but he did say that the threat posed by the Syrian conflict had led to an increase in the workload of counter-terrorism police, either through community or business engagement or operational activities such as criminal investigations or intelligence-gathering.