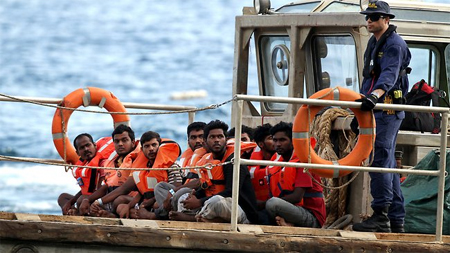 The Australian governments own immigration expert Paris Aristotle says it is ”absolutely certain” there will be more asylum-seeker deaths at sea unless the government implements the full suite of measures recommended to it last year.

In the wake of the deaths of two asylum-seekers this week Mr Aristotle, who is currently visiting the Nauru detention centre, said the latest incident was not the first this year.

He said last week an asylum-seeker boat capsized mid-voyage and 60 people were left clinging to the hull.

Luckily a surveillance aircraft happened to be  flying over the scene at the time and was able to arrange for those at risk of drowning to be rescued, he said.

”We could have lost another 60 in that incident,” Mr Aristotle told ABC radio.

”There are reports all the time of boats going missing and not knowing where they have ended up.”

Mr Aristotle along with former defence force chief Angus Houston and former DFAT secretary Michael L’Estrange handed down a report last August to the Gillard government with a full package of 22 recommendations -including the reopening of Nauru and Manus Island detention centres- on how to tackle the spate of asylum arrivals in Australian waters.

He said there would be more deaths at sea unless greater action was taken.

”I think it is absolutely certain that there will be more deaths to come if we don’t get on with a proper regional arrangement to deal with these issues,” Mr Aristotle said.

“We know they (asylum-seekers) drown regularly. It is an absolute tragedy and we have to do better.”

He praised the immigration department for doing ”some extraordinary work” in filling 20,000 humanitarian places, saying the results would be seen in coming months.

But he warned asylum seekers would keep coming by boat while some of the Houston review’s recommendations remain to be implemented.

But he conceded more work was needed to resolve issues, such as arrangements for unattached minors.

A young boy and a woman drowned on Monday after a series of large waves smashed their overcrowded boat near Christmas Island.

Three others had narrow escapes.

The Greens and refugee advocates have called for a coronial inquest into the tragedy.

Opposition Leader Tony Abbott today told reporters in Melbourne ”the only way to stop the deaths is to stop the boats”.

”The way to stop the boats is rigorous offshore processing, temporary protection visas, a preparedness to turn boats around, and a kind of relationship with Indonesia which the Howard government had and the current government jeopardised,” he said.

”Every time the PM talks about Malaysia . . . she is yet again signing something for doing nothing,” he said.

”What the tragedy has shown this week is being cruel and mean and harsh for the sake of domestic politics, which is what Tony Abbott is all about, doesn’t save lives at sea,” Ms Hanson-Young said.

She said the Houston report needs to be revisited.

”We need a review of the progress of that report and the recommendations.”

He said there needed to be a boost in foreign aid for countries such as Pakistan and Iran to prevent people taking the risky boat journey to Australia.

“Neither party has yet to come to realise that this is a really complex problem,” Mr Wilkie told ABC radio of both the government and the opposition.

He said the government needed to “come down like a ton of bricks” on people smugglers.