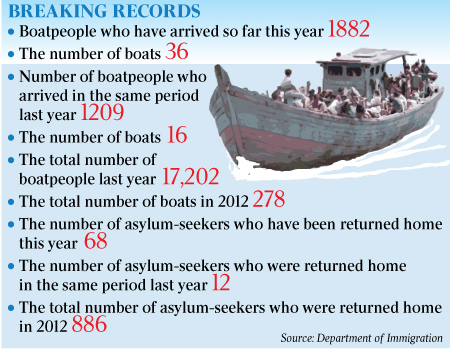 The number of asylum-seekers coming to Australia by boat surged in the first 2 1/2 months of this year, with a 55 per cent spike in arrivals compared to the same period last year.

Almost 1900 people have arrived in the first 73 days of this year, compared with 1209 for the same period last year, which ultimately saw a record of more than 17,200 people arriving in Australia by boat to claim asylum.

So far this year, 36 boats have arrived in Australian waters, compared with 16 during the same period last year.

“It always gets worse until a government has the resolve to do something about it.”

Mr Keenan reiterated the Liberal Party’s commitment to Howard government policies if it won power after the federal election on September 14, including the use of the navy to tow boats containing asylum-seekers out of Australian territorial waters.

Earlier this week, two navy vessels were involved in the recovery of 125 suspected asylum-seekers from the two boats in difficulty in the Indian Ocean off the northwest coast of Australia.

A Dash-8 turboprop plane operated by the Australian Customs Service spotted the wreckage of the first boat on Wednesday morning and 77 people were rescued from the water.

Within hours, the HMAS Ballarat recovered 48 passengers and one crew member from a second boat after receiving reports that it, too, was in danger.

These latest arrivals bring the total number this year to 1882, compared with 1209 for the same period last year, which ultimately saw a record of more than 17,200 people arriving in Australia by boat to claim asylum.

Figures provided by the Department of Immigration also show the numbers of people who have been returned to their home countries are increasing, but represent only a fraction of the total arrivals.

Sixty-eight people have been returned so far this year, up from 12 in the same period last year.

However, this figure dramatically increased to a total of almost 900 for the year in total.

Refugee advocates fear the latest arrivals will add to the growing list of about 10,000 asylum-seekers yet to have their claims processed, many of whom are now living in the community without work rights.

“You have a large number of people building up who are used to being self-sufficient and are now denied that opportunity,” advocate Ian Rintoul said.

These asylum-seekers receive a federal government payment equivalent of up to 89 per cent of the Centrelink special benefit or about $440 every two weeks.

A spokeswoman for Immigration Minister Brendan O’Connor said: “This is a global problem which needs regional co-operation and regional solutions.

“The Gillard government is determined to break the people-smugglers’ business model and deter people from making the perilous journey on unseaworthy vessels to get to Australia.”

Source: The Australian – “Boat arrivals up 55pc on a year ago”