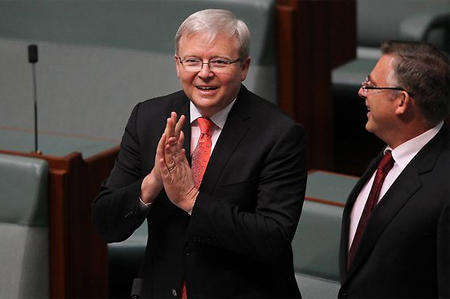 Pressure is growing on Julia Gillard to exploit Kevin Rudd‘s popularity with the electorate and elevate his role in the election campaign, with four members of her cabinet now publicly declaring that the former prime minister is an asset for the party.

Mr Rudd yesterday dismissed leadership questions, telling journalists to “give us a break” when asked if he had the numbers to challenge Ms Gillard.

Ms Gillard has faced internal criticism over her decision last week to name the election date of September 14 and the timing of a ministerial reshuffle announced at the weekend. She has also faced a backlash from Northern Territory ALP members over her “captain’s pick” of Nova Peris as the NT Senate candidate, which involved the dumping of sitting senator Trish Crossin.

Labor’s hopes have also been set back by the latest Newspoll, which showed the government’s primary vote had fallen to 32 per cent and Mr Abbott had surged in the preferred prime minister stakes to trail Ms Gillard by only two percentage points. Labor has also lost ground to the Coalition on major issues.

A key Rudd supporter dismissed reports that the former prime minister had up to 45 votes in the 102-member caucus.

“Nothing is happening,” the supporter said.

However, the former prime minister is in high demand from Labor MPs to appear in their electorates. He already has a dozen events booked around the country, including an interfaith forum on February 20 run by Labor MP Tony Zappia in the South Australian seat of Hindmarsh, held by Labor by a margin of 6.1 per cent.

Senator Conroy said the fact that Mr Rudd was now campaigning across the country against the Opposition Leader was a good thing for the government.

“I’ve been saying since last year it would be great if Kevin Rudd was out there campaigning against Tony Abbott, and I think that’s what he’s starting to do,” Senator Conroy told 3AW.

Mr Shorten described Mr Rudd as an “asset” to the party. “I think he’s a very active campaigner, he’s an asset and I’m sure he’ll be utilised. I think he will act in the manner consistent with all the other MPs, which is about making sure the Coalition with its backward-looking ideas don’t form government and Labor is successful on September 14,” Mr Shorten said.

Industry Minister Greg Combet refused to be drawn on whether Mr Rudd should be given an increased role. “We’re actually in government and he’s a backbencher and we’re doing important reforms to the economy and changes to our society and important environmental reforms,” he said.

Mr Combet said it was “very important that we get beyond the superficiality of some of these debates about Kevin Rudd and Tony Abbott and Julia Gillard and who said what to who and focus on what’s important for the country in the years ahead”.

Mr Abbott yesterday told Coalition MPs to avoid hubris and arrogance. He said the contrast between the Coalition and the “unsettled” Labor caucus could not be greater, but MPs should not get ahead of themselves. Mr Abbott said voters had already concluded Labor did not deserve another term, but they were still considering whether the opposition deserved a go.

Labor strategists in Queensland predicted Campbell Newman‘s visible leadership during last week’s floods in Queensland would help him retrieve some of the support his government lost with the sackings of thousands of public servants last year.

The latest Newspoll, published in The Australian yesterday, revealed Labor rated below the Coalition as the party best able to handle the issue of unemployment, suggesting the government’s scare campaign about Mr Abbott mirroring Mr Newman’s slash and burn tactics had failed to resonate with voters.

Labor insiders, as well as political scientist John Wanna, believe Mr Newman will temporarily benefit from the floods, but nowhere near as much as his predecessor Anna Bligh.