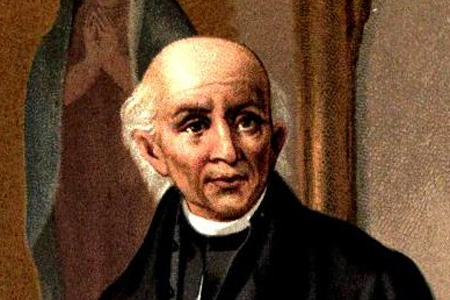 On September 16th 1810, Miguel Hidalgo y Costilla, a Catholic priest, launched the Mexican War of Independence with the issuing of his Grito de Dolores, or “Cry of Dolores.”

The revolutionary tract, so-named because it was publicly read by Hidalgo in the town of Dolores, called for the end of 300 years of Spanish rule in Mexico, redistribution of land, and racial equality.

Thousands of Indians and mestizos flocked to Hidalgo’s banner of the Virgin of Guadalupe, and soon the peasant army was on the march to Mexico City.

In the early 19th century, Napoleon’s occupation of Spain led to the outbreak of revolts all across Spanish America.

Miguel Hidalgo y Costilla–“the father of Mexican independence”–launched the Mexican rebellion with his “Cry of Delores,” and his populist army came close to capturing the Mexican capital. Defeated at Calderón in January 1811, he fled north but was captured and executed.

He was followed by other peasant leaders, however, such as José María Morelos y Pavón, Mariano Matamoros, and Vicente Guerrero, who all led armies of native and racially mixed revolutionaries against the Spanish and the Royalists.

Ironically, it was the Royalists, made up of Mexicans of Spanish descent and other conservatives, who ultimately brought about independence. In 1820, liberals took power in Spain, and the new government promised reforms to appease the Mexican revolutionaries.In response, Mexican conservatives called for independence as a means of maintaining their privileged position in Mexican society.

In early 1821, Agustín de Iturbide, the leader of the Royalist forces, negotiated the Plan of Iguala with Vicente Guerrero. Under the plan, Mexico would be established as an independent constitutional monarchy, the privileged position of the Catholic Church would be maintained, and Mexicans of Spanish descent would be regarded as equal to pure Spaniards. Mexicans of mixed or pure Indian blood would have lesser rights.

In 1822, as no Bourbon monarch to rule Mexico had been found, Iturbide was proclaimed the emperor of Mexico. However, his empire was short-lived, and in 1823 republican leaders Santa Anna and Guadalupe Victoria deposed Iturbide and set up a republic, with Guadalupe Victoria as its first president.