December 3, 1854 – The Battle of the Eureka Stockade is held near Ballarat, Victoria 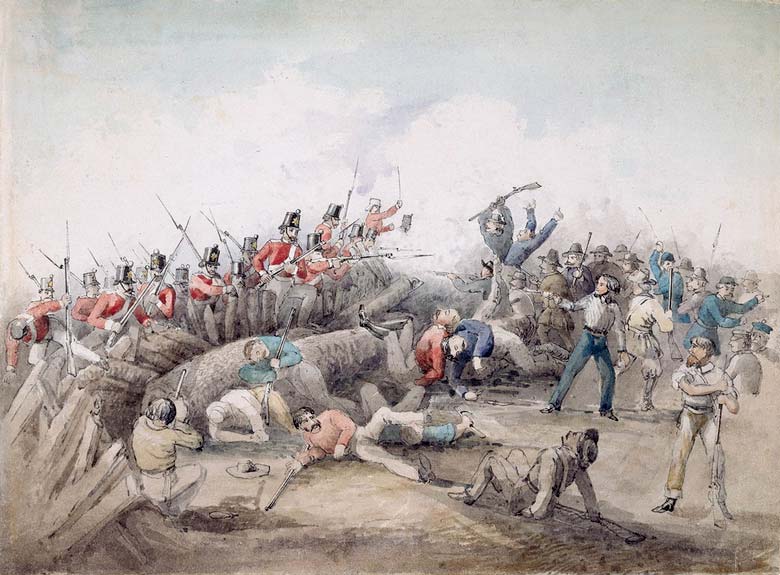 The Eureka Stockade was the rebellion initiated by the diggers on the Ballarat, Victoria goldfields in 1854. Conditions on the Australian goldfields were particularly harsh.

The main source of discontent was the expensive miner’s licence.

It cost 30 shillings every month and permitted the holder to work a 3.6 metre square “claim”. Licences had to be paid regardless of whether a digger’s claim resulted in the finding of any gold.

Frequent licence hunts, during which the miners were ordered to produce proof of their licences, added to the increasing unrest.

Previous delegations for miners’ rights had met with inaction from the Victorian government, so on 29 November 1854, the miners burned their licences in a mass display of resistance against the laws which controlled the miners.

On December 1, the miners began to construct a wooden barricade, a stockade from which they planned to defend themselves against further licence arrests or other incursions by the authorities.

At 3:00am on Sunday, 3 December 1854, 276 police and military personnel and several civilians stormed the stockade. It remains unclear which side fired first, but in the ensuing battle, 22 diggers and 5 troopers died.

Although the rebellion itself failed in its objective, it gained the attention of the Government. A Commission of Enquiry was conducted and changes were implemented.

These included abolition of monthly gold licences, replaced by an affordable annual miner’s licence. The numbers of troopers were reduced significantly, and Legislative Council was expanded to allow representation to the major goldfields.

Peter Lalor and another representative, John Basson Humffray, were elected for Ballarat. Later, Lalor was elected Speaker of the Legislative Assembly of Victoria. For these reasons, the Eureka Stockade is regarded by many as the birthplace of Australian Democracy.

Social Justice Campaigner. Business and Education Consultant. Former Business/ESL Teacher. Lived in China and USA. Dealing with disability. My articles have been cited in New York Times, BBC, Fox News, Aljazeera, Philippines Star, South China Morning Post, National Interest, news.com.au, Wikipedia and many other international publications.
View all posts by Craig Hill »
« December 3, 1971 – Pakistan invades India as a result of the Bangladeshi struggle for freedom
December 4, 1872 – The ‘Mary Celeste’ is found abandoned, with its cargo intact, but no sign of its crew or passengers »