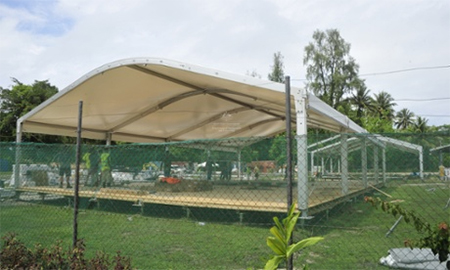 The Australian immigration minister, Scott Morrison, has confirmed that Australian staff were evacuated from the regional processing centre on Manus Island after an incident involving “Papua New Guinean agencies”.

The minister, who said he had not been fully briefed on the incident, said details were a “matter for the Papua New Guinean government to address”.

He said he believed all Australian staff were safe and he was unaware of any injuries among detainees on Manus.

Guardian Australia spoke to a witness to the evacuation who said it had occurred about 9.30am on Friday. The witness, who did not want to be identified, said detainees had been left alone in the compound as all workers, including contractors and Department of Immigration staff, evacuated the regional processing centre.

The witness said he understood the agencies involved had been the PNG police and the PNG army.

“Everyone was scared, everyone was asking what was going on,” the witness said.

The PNG high commission in Canberra said it was unaware of the matter.

The witness said some staff had returned to the compound after an hour.

Information on one of the cases was provided to Guardian Australia by the UNHCR, the UN refugee agency. “They are wrong,” Morrison said.

Morrison would not comment on claims made by the Asylum Seeker Resource Centre that the government was transporting eight pregnant asylum seekers to Nauru on Friday.

The minister also announced a “much stronger position” on the policy of enhanced screening, meaning asylum seekers arriving from Sri Lanka – irrespective of their point of departure or method of transport – would undergo the process designed to fast-track removals.

Morrison said all 79 passengers on a boat from Sri Lanka which had arrived at the Cocos Islands on 11 October had been “screened out” and all but six were returned to Sri Lanka earlier in the week after they were found not to have engaged Australia’s protection obligations.

The enhanced screening process has been criticised by a number of human rights groups, an ex-immigration official and the UNHCR, who worry that form of interview may mean that legitimate refugee claims slip through the net.

Morrison said on Friday that he was “completely comfortable about the process that is being used. The message is very clear: if you are coming here to try something on, to get access to Australia from Sri Lanka, you will go straight back.”

The Operation Sovereign Borders commander, Lieutenant General Angus Campbell, said three boats, including the one carrying 79 Sri Lankans, had arrived over the past week carrying 173 people. Morrison noted a “significant decline” in the number of asylum seeker boats arriving in Australia since the new government but said he was “drawing no conclusions about those results”.

Campbell added there were now 1,061 people held in the regional processing centre on Manus, 827 on Nauru and 2,211 on Christmas Island.

Morrison also said the Coalition had not scrapped the independent review of adverse Australian Security Intelligence Organisation findings for refugees, and claimed reporting before the federal election had been misleading.

“We [said we] would see how it was operating and in practice and that’s what we’re doing,” he said. Morrison said the review process, led by the former federal court judge Margaret Stone, was still operational.

In an update issued after the press briefing, Morrison clarified that no staff on Manus had been evacuated to HMAS Choules, as he had previously stated.

“The offshore processing centre continues to operate normally and all staff continue to remain onsite performing their assigned duties.

“The government can confirm that no transferees were under threat during this incident and that none were harmed,” the release said.