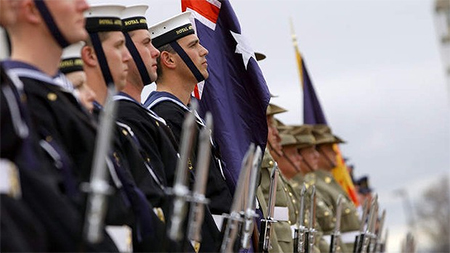 The anti-terrorism protection force at some of Australia’s key military bases is to be slashed, as the Defence Department struggles to find budget savings.

Australian Protective Service officers will be taken off guard duty at Victoria Barracks in Melbourne, Sydney’s Holsworthy Barracks, the navy’s Garden Island base and the army’s officer training college at Duntroon in Canberra.

It is understood the 500-strong protection forced will be cut by up to 110, with gaps in the ranks to be filled by security guards provided by private sector contractors.

The cash-strapped Defence Department, which imposed a hiring freeze in August, has launched a special project – codenamed Ampla – to reduce its spending on Protective Services officers as it struggles with budget cuts imposed by the previous Labor government.

The PSOs are unsworn Australian Federal Police employees, trained in anti-terrorism first-response techniques as well as close protection duties and were brought in to protect the bases in the wake of a foiled attack in 2009 by an Islamist terrorist cell on Sydney’s Holsworthy Barracks.

There have also been instances of criminal gangs targeting military installations to steal weapons, with the most recent alleged incident in Darwin late last year sparking a review of security at Australia’s naval bases.

The Defence Department’s “MediaOps” unit did not respond to questions on Tuesday but the public sector union, the CPSU, said that cutting the specialist officers was potentially dangerous.

“We are concerned Defence appears to be downgrading security at bases not because they have suddenly become safer, but because they are under budgetary pressures,” CPSU national secretary Nadine Flood said.

“Getting rid of dedicated staff with specialist anti-terrorist first-response skills is a bad idea. The government employs protective service officers to do this important work.

“This is a short-sighted and potentially dangerous decision that needs to be urgently overturned.”

According to internal CPSU bulletins, the plan to redeploy the protection officers was already well under way.

“While the AFP was unable to provide concrete details regarding the size of the reductions and which locations would be affected, they did outline the process that they plan to follow to make the PSO reductions that eventuate,” the bulletin says.

The AFP referred questions to the Defence Department.