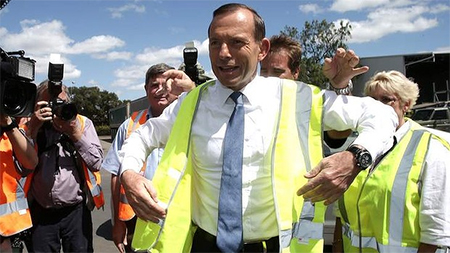 Opposition Leader Tony Abbott has confessed to finding the burqa “confronting” while defending Liberal candidate Ray King for describing the Islamic attire as a “sign of oppression”.

Asked whether he supported the statements by Mr King, who drew a link between the burqa and criminality at a fund-raiser, Mr Abbott admitted he found it “a very confronting attire”.

“Frankly, it’s not the sort of attire that I would like to see widespread in our streets,” Mr Abbott told reporters on Saturday, while campaigning in Queensland.

He also drew a link between the burqa and criminality at the $300-a-head fund-raiser in Smithfield in May, where guests included the disgraced former detective Roger Rogerson, according to an attendee.

Despite expressing concern about the burqa, Mr Abbott said people were “entitled to make their choice” to wear the Islamic attire.

He defended Mr King as having an “unblemished record”.

Mr King was the subject of a complaint to the Community Relations Commission in 2011 over allegedly racist remarks he made at a “meet and greet” with migrant representatives.

Mr Abbott refused to comment on a separate Fairfax Media report revealing Mr King had proposed a radical new policing system in which criminal suspects would be injected with satellite-trackable microchips shot from a “high powered sniper rifle”.

“I’m just not going to get into the micro-detail of policing,” Mr Abbott said.

He accused the Labor Party of running a smear campaign against Mr King.

“Ray King is a decorated police officer with an umblemished record,” he said.

“His integrity and professionalism has been repeatedly vouched for.”

Mr King appeared before the Wood royal commission into the NSW police force over the practice of Fairfield detectives receiving free meals and alcohol from the Marconi Club in exchange for an informal security presence.

When questioned subsequently about his comments on the burqa, Mr King rejected saying they had no place in Australian society.