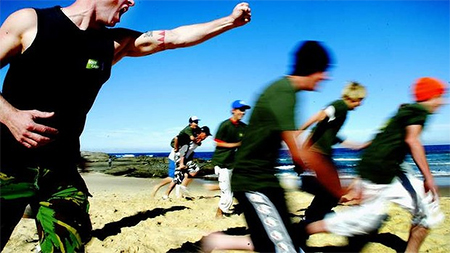 Strict disciplinary regimes: Army-style camps are on the table as an election policy for the Rudd government

Young job seekers would be forced into tough army-style boot camps to qualify for the dole, under an election policy being considered by the Rudd government.

The Youth Start Boot Camp was tabled as a future election policy in a submission that has been leaked to Fairfax Media. It was put to the Labor government‘s powerful expenditure review committee by ministers Bill Shorten and Kate Ellis in May.

Senior government sources said the army-style camps – which are designed to impose strict disciplinary regimes – remained on the table as an election policy for Prime Minister Kevin Rudd.

The idea was framed as a possible vote winner for the government and was slated to be announced before August 15, if accepted.

Fairfax has an outline of the written submission, which was discussed during a meeting of then Gillard government ministers putting up election campaign strategy proposals to the committee. Although the submission and initial meeting took place while Julia Gillard was prime minister, high-ranking government sources insist the proposal is still on the table.

Asked if the proposal was still under consideration, a spokeswoman for Mr Rudd said: “The government does not publicly discuss the submissions that come before the expenditure review committee of cabinet.”

But a senior government source said the submission was still alive. “Whatever the official word, this has not been taken off the table,” the source said. “Not everything has been thrown out with the change of leadership.”

The proposal calls for $70 million over four years to be reallocated from Jobs Services Australia providers into other programs to ”assist young job seekers and provide campaigning opportunities”.

Early school leavers aged between 15 and 21 are the target.

A wide variety of wilderness and adventure boot camps are in place across Australia, ranging from those teaching discipline, presentation and attitude to those aimed at young repeat offenders.

The Queensland government is testing an early intervention youth boot camp that will focus on young people at risk of long-term offending.

More than 84 per cent of the youths in BoysTown programs have not completed year 10.

Nearly half have never had a job or came from families that had a history of welfare dependency.

”Employers tell us there are two major things that they look for: competence and character,” said John Perry, BoysTown’s employment, education and training manager.

A study by Monash University found 61 per cent of participants in BoysTown programs found full-time employment, and nearly 12 per cent found part-time or casual work.

The Brahminy Foundation’s wilderness camp, 200 kilometres from Darwin, is for some of society’s most troubled and unemployable youths, including some from NSW.

Founder Allan Brahminy said his camps were tough and intense. But he stressed there was a therapeutic element to the programs. They included stays of up to a year, with 21-day wilderness hikes comprising five days’ kayaking and more than 100 kilometres of walking.

Mr Brahminy is negotiating with NSW Police and others to open a residence west of Bourke.

As he spoke to Fairfax Media on Friday, a troubled youth was digging his fourth hole one metre deep and one metre wide.

”We’re not a holiday camp,” he said, adding that his wilderness camps had ”zero tolerance” for poor behaviour.

In the ministerial submission, the ministers highlighted in bold their proposal for a Youth Start Boot Camp and explained that: ”Unemployed young people will participate in an army boot camp and pre-employment training.”

Other options mooted were community work experience for unemployed youth, first job programs for youth from disadvantaged backgrounds, and a combination of all of the measures including rigorous boot camps.

The submission complains about poor recognition for the existing program, which funds providers to deliver targeted assistance in the form of structured activities of up to 25 hours a week to build life, study and employment skills. It says there is ”scant data on delivery rate and outcomes”.

Boot camps were proposed as a better option.

”Youth unemployment is a growing problem that we need to address,” the submission reads. ”There are opportunities to partner with business, particularly big business, and to end intergenerational unemployment for young people.”