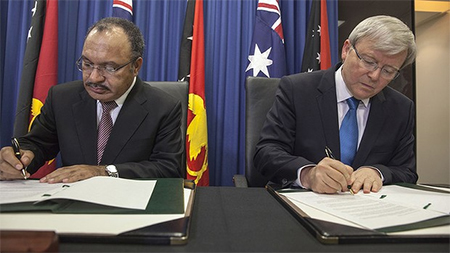 Papua New Guinea has warned Australian politicians to show it more respect, a day after Opposition Leader Tony Abbott went on the attack over foreign aid flowing to the country.

Mr Abbott had accused Prime Minister Kevin Rudd of subcontracting out the nation’s aid program to PNG as part of the asylum seeker processing deal, questioning whether this “free gift” would be spent accountably and prudently.

The PNG High Commission in Canberra issued a brief statement on Wednesday urging politicians to show restraint in their comments.

“The High Commissioner of Papua New Guinea to Australia, today warned Australian politicians to observe international protocols and courtesies when discussing relations with other friendly sovereign nations and not impugn the dignity of our leaders who are attempting to assist Australia in this very complex regional and international issue of Asylum Seekers,” the statement said.

The media release, issued by High Commissioner Charles W Lepani, did not name Mr Abbott or specify any other politician it was aimed at.

Mr Abbott said on Tuesday the Rudd government appeared to have “subcontracted out to PNG the management of our aid program at least in that country”.

“Now it seems we are basically just handing over cash to the PNG government. Australian aid should never be a free gift to a foreign government,” he said.

“In relation to the half a billion dollars that is provided to PNG, which is estimated to be $507 million next year, how is that money to be allocated and what say does the Australian government have over issues such as accountability, governance and transparency?” Ms Bishop said on Tuesday.

The attack came after Mr O’Neill boasted on Monday that he had achieved a “realignment” of the country’s aid program from Australia with the PNG government setting the priorities.

Following the PNG High Commission’s statement on Wednesday, Julie Bishop sought to emphasise the Coalition’s issue was with Mr Rudd’s truthfulness, not with the PNG government.

“Our concerns are with Mr Rudd’s behaviour and his failure to be open and honest about what he has promised under this arrangement.”

Mr Rudd confirmed on Wednesday the government would adjust development assistance “to support our friends in Papua New Guinea”.

But he described Mr Abbott’s claims about cash grants to PNG as a “wild political assertion in order to obtain political office”.

“What he said was that the Australian government was providing unaccountable cash grants to the government of Papua New Guinea,” Mr Rudd said during a visit to a Melbourne school.

“That is a bald-faced lie … Every single dollar that we provide any country in the world through development assistance cooperation is done on the basis of that bilateral agreement, which we monitor the implementation of, to ensure that it is spent on the right purposes: hospitals, schools and the rest.”

The Australian National University‘s leading PNG/foreign aid specialist, Professor Stephen Howes, told Fairfax Media’s Breaking Politics program it was normal to have dialogue between the country giving the aid and the country receiving the aid.

Professor Howes said Australian aid had largely been focused on maintaining existing infrastructure such as roads, but PNG wanted the aid to be targeted towards building new infrastructure.

Debate over the PNG deal came as Indonesian authorities searched for survivors after the sinking of an asylum seeker boat off the coast of Java believed to be heading for Australia.

Indonesia’s Search and Rescue Agency said on Wednesday 161 people were rescued of which 115 were adults and the remainder were children. At least four were confirmed dead. The fatalities are believed to include young children.

Mr Abbott argued Mr Rudd had started the problem by unwinding the Howard government-era Pacific Solution in 2008 and only the Coalition could be trusted to deal with the issue.