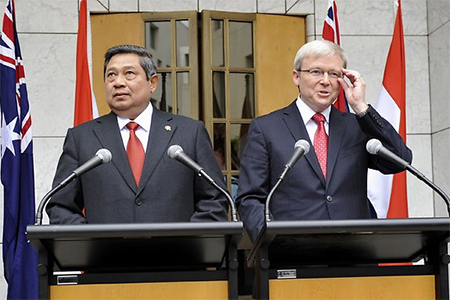 Many Indonesians find it hard to control their temper each time they read or hear any kind of provocative remark from the Australian media, military, politicians or celebrities. The country is perceived as an arrogant neighbour with a strong sense of superiority towards Indonesia and no more important agenda than to destroy its territorial integrity.

To us, Australia is a nation that has little respect for Indonesia, and as a great nation we don’t believe we deserve such. We would like Australians to learn more about Indonesia because of our pivotal role in the global community. Yet we often ignore the principle “to know thy neighbour” and instead focus on forcing them to deepen their knowledge about us.

Who among Indonesians would not feel angry at the perception that 54 per cent agree that “Australia is right to worry about Indonesia as a military threat” and that “Indonesia is a dangerous source of Islamic terrorism”? One thing we need to remember is that perception does not always reflect reality.

Most of us probably will never forgive Australia for “masterminding” the independence of East Timor, although we often forget that it was then president BJ Habibie who initiated an independence referendum for the former Indonesian colony.

It is no exaggeration to say that most of us are strongly suspicious that Australia will also be the main supporter of the Papuan people in establishing their own state despite repeated denials from Australian government officials, including Foreign Minister Bob Carr during a recent meeting with a group of visiting Indonesian journalists, since Australia was among the first countries to endorse Indonesia’s annexation of East Timor in the 1970s but later supported East Timor’s independence. The strong US military presence in Darwin only strengthens the suspicion that Papua’s independence is high on Australia’s agenda.

During the Suharto era, the then president was outraged when an Australian newspaper reported the corrupt practices of his children, although we found out later that the reports were not totally wrong (if not totally right).

Yesterday, Kevin Rudd arrived in Jakarta to meet President Susilo Bambang Yudhoyono. Indonesia will opt to remain neutral regarding the September general election in Australia no matter who emerges as the winner (Labor or the Coalition), although in my view Yudhoyono probably has a personal preference for Rudd. Rudd’s visit itself was not at his own initiative: it was his predecessor, Julia Gillard, who tabled the visit.

I remember visiting parliament in Canberra last month. Rudd was sitting in the back row when Gillard responded sternly to a statement by an opposition legislator who teased her about an economic issue. Rudd received little attention from the media or even his colleagues because most of the Australian media was confident that Rudd would not get enough votes to exact revenge against Gillard and secure the Labor Party’s helm.

Gillard had called for an election in September, while the opposition party was leading in several opinion polls. Tony Abbott, who promised to take a much tougher stance against boatpeople, including the possible deployment of naval ships to turn around the boats carrying them, was outraged at Gillard’s announcement that she would meet Yudhoyono in Jakarta in August.

Gillard clearly wanted to get a significant concession from the Indonesian government concerning boatpeople. I met Gillard along with other Indonesian journalists as a part of an Australian Foreign Ministry program.

For Indonesia, Labor’s approach is more sensible because the burden is shared. Indonesia cannot control the flow of the boatpeople because of the vastness of the archipelago, and also because of the corrupt mentality of Indonesian officials who have direct contact with the migrants. The root of the problem lies not only with Indonesia but with the countries of origin.

Rudd’s visit would be more meaningful were he to visit again after winning the election, and if it were more of a courtesy visit.

In every way, Indonesia is a major state, and it is only right that it holds an honourable position among the international community.

But we also need to behave as a great nation, one for which its people have high respect. There are 1000 reasons to hate Australia, but we must also be ready when the same reasons are applied to us.

Kornelius Purba is senior managing editor at The Jakarta Post. This is an edited version of an article that appeared in that newspaper.
Source: The Australian – Patronising approach won’t impress Indonesia

3 thoughts on “Australia seen as patronising and arrogant by Indonesians”