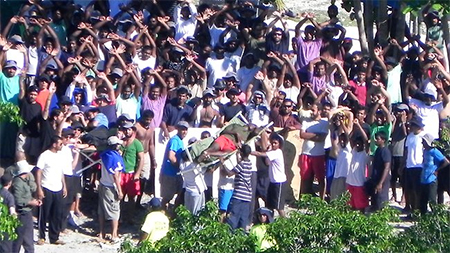 Asylum seekers from ethnic and religious majorities in their own countries will have great difficulty establishing a valid claim for refugee status in Australia under new Rudd government policy.

This will strike hardest at Iranians, currently the single largest and most troublesome component of the asylum-seeker flow.

However Senator Carr made clear the new refugee determination regime planned by the government would severely restrict the discretion of tribunals and courts to assess security and political conditions in asylum-seeker countries of origin.

That assessment would be done for them by Foreign Affairs diplomats and the minister made clear the DFAT analysis would be “hard-edged”.

The new bid to slash the success rate of refugee applications from asylum-seekers arriving by boat, running above 80 per cent, is the cornerstone of the “harder edged” policy approach Senator Carr began signalling on Wednesday, the day of Kevin Rudd‘s restoration to the leadership.

It is understood that during his talks with senior Indonesian ministers yesterday the Foreign Minister renewed a request then-foreign minister Rudd made 18 months ago for the Indonesians to consider revoking the visa-on-arrival status of Iranian visitors, which has been a major factor in opening up the Tehran pipeline to Christmas Island.

This and other issues of Indonesian co-operation in the fight against people-smuggling will “figure big” in next Friday’s leadership summit between the Prime Minister and President Susilo Bambang Yudhoyono.

Mr Rudd’s attendance at the summit, originally planned for Dr Yudhoyono to host the vanquished Julia Gillard, was confirmed yesterday.

The Foreign Minister’s visit yesterday was to mainly clear the ground for discussions, particularly on asylum-seekers, the vast majority of whom transit through Indonesia — more than 12,000 so far this year.

Senator Carr said it “wouldn’t be fruitful” to disclose details of their discussions but Mr Amir confirmed the visitor had renewed the Australians’ request to withdraw visa-on-arrival privileges to Iran — the only major asylum-seeker origin country whose citizens have this privilege from Indonesia.

Mr Amir said after their meeting: “He is concerned about the many Iranians using visa-on-arrival facilities.”

Source: The Australian – Iranians hit as test gets tougher

General Manager at Craig Hill Training Services * Get an Australian diploma by studying in your own country * Get an Australian diploma using your overseas study and work experience * Diplomas can be used for work or study in Australia and other countries. * For more information go to www.craighill.net
View all posts by Craig Hill »
« Australian government fears conflict with Indonesia under opposition asylum policy
Australian National Disability Insurance Scheme offers better quality of life »