In Australia, some asylum women and kids to be released soon 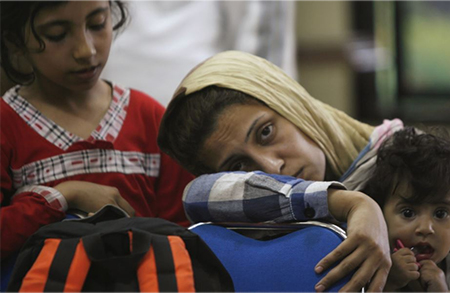 The government has moved more than 500 children and families into the Curtin and Wickham Point detention centres, readying them for release on bridging visas with no work rights.

Immigration Minister Brendan O’Connor announced on Tuesday that part of the remote Wickham Point facility, about an hour out of Darwin, and Curtin detention centre in Western Australia had been reconfigured to hold family groups for “short-term” stays while health and security checks are carried out.

The Department of Immigration last night confirmed 409 women, children and family groups had already been moved into the revamped “alternative place of detention” in Wickham Point.

Another 139 women, children and families have been moved to the Curtin detention centre.

The transfer comes after Mr O’Connor confirmed family groups would be released into the community on strict “no-advantage” bridging visas that deny asylum-seekers the right to work and force them to fend for themselves in the community on a welfare payment less than the Newstart Allowance — a move which triggered some unrest within Labor’s backbench.

The relocations came as NSW Police confirmed two Sri Lankan asylum-seekers on bridging visas were charged over an alleged indecent assault of two women and a 14-year-old girl at a shopping centre in Parramatta.

Mr O’Connor’s office did not comment on the matter yesterday but opposition immigration spokesman Scott Morrison called on the minister to reveal whether the men had been taken back into detention pending their court hearing.

He said the alleged assault followed an earlier incident in February, and called on Labor to outline steps it was taking to prevent further incidents.

“Minister O’Connor flatly rejected our calls for a review of the scheme, for reporting requirements for bridging visa holders to be put in place, for a behaviour code to be established for those released into the community and for appropriate accommodation standards to be developed,” he said.

2 thoughts on “In Australia, some asylum women and kids to be released soon”