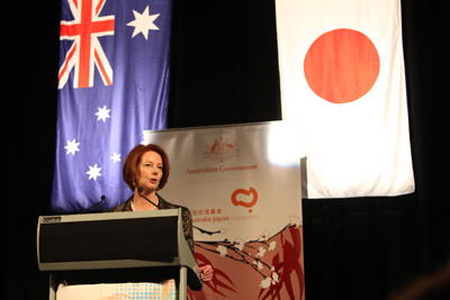 Australia and Japan are eyeing a chance to conclude a free-trade agreement, possibly with a visit from Japanese Prime Minister Shinzo Abe before the middle of the year.

Comments made by Mr Abe and US President Barack Obama in their recent meeting appear to have heightened hopes of Japan joining the Trans-Pacific Partnership free trade pact negotiations.

And now officials on the Australian side hope that in moving towards the kind of reform necessary to join the TPP, Japan can first conclude the FTA with Australia and have it serve as a show of faith about agricultural tariff reform.

Mr Abe has singled out Australia as one the key countries Japan is keen to strengthen ties with amid a worsening security and strategic situation with China.

So an opportunity has opened up to reach a deal, although similar chances in the past have fallen through amid political instability and agricultural resistance in Japan.

The annual high-level Australia-Japan Conference, chaired by Rod Eddington and Japanese businessman Akio Mimura, took place in Tokyo on Friday amid an air of renewed optimism on the FTA.

Parliamentary secretary Richard Marles, who spoke at the conference, told The Australian the government welcomed Japan’s interest in the TPP and said the “noises from this government and Japan are very positive” on the FTA.

“It would be a very good sign in terms of Japan’s intent to enter the TPP by concluding an FTA with Australia,” he said.

Studies suggest the FTA could add $39 billion to Australia’s GDP over 20 years. Experts say this is based on an unrealistic best-case scenario, but the likely benefits would still be considerable.

However, any deal would probably include reductions to the 5 per cent car tariff Australia applies to foreign cars and trucks, a change that would cost the government revenue and raise the hackles of automotive unions and local car manufacturers. Import tariffs on cars are expected to net Treasury $940 million in 2012-13.

Japan’s path towards trade liberalisation took a leap forward at the talks in Washington last month with the two sides agreeing on two key concessions: that Japan would not have to immediately commit to eliminating all tariffs, and that all items would be up for negotiation.

The joint statement gives Mr Abe the ability to reassure rice farmers that some level of protection will remain for Japan’s staple agricultural commodity, and Mr Obama the ability to tell auto and agricultural producers that Japan won’t be able to declare anything off limits.

Nevertheless, the TPP will require quite sweeping reforms in Japan, and Mr Abe — who is riding high in the polls for now — faces bitter opposition from within his own party, which has close ties with Japanese agriculture, towards any move to join the TPP negotiations.

He is also facing a crucial upper house election in July, in which he hopes to capture both houses of parliament. He will be anxious to avoid division in the lead up.

The circumstances have created a window of opportunity to finally clinch a deal after six years of torturous negotiations.