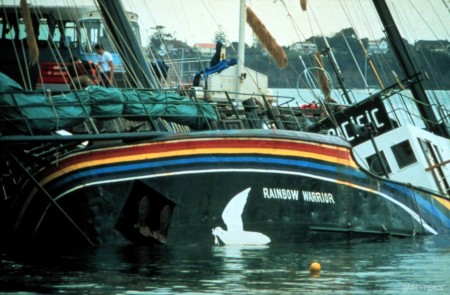 On July 10th 1985, in Auckland harbour in New Zealand, Greenpeace‘s Rainbow Warrior sank after French agents in diving gear planted a bomb on the hull of the vessel. One person, Dutch photographer Fernando Pereira, was killed. The Rainbow Warrior, the flagship of international conservation group Greenpeace, had been preparing for a protest voyage to a French nuclear test site in the South Pacific.

Two days after the incident, French authorities denied responsibility in the bombing and continued to do so even after New Zealand police arrested two French secret service agents in Auckland. Under pressure from New Zealand authorities, the French government formed an inquiry to investigate the incident and after several weeks concluded that the French agents were merely spying on Greenpeace.

Later in the year, however, a British newspaper uncovered evidence of French President Francois Mitterrand‘s authorisation of the bombing plan, leading to several top-level resignations in Mitterrand’s cabinet and an admission by French Prime Minister Laurent Fabius that the agents had sunk the vessel under orders.

In Auckland, the two agents pleaded guilty to the lesser charges of manslaughter and wilful damage and were each sentenced to 10 years in prison. Following negotiations with the French government, New Zealand released them a year later. In 1992, President Mitterrand ordered a halt to French nuclear testing, but in 1995 it was resumed, and Greenpeace sent The Rainbow Warrior II to French Polynesia to protest and disrupt the tests.

General Manager at Craig Hill Training Services * Get an Australian diploma by studying in your own country * Get an Australian diploma using your overseas study and work experience * Diplomas can be used for work or study in Australia and other countries. * For more information go to www.craighill.net
View all posts by Craig Hill »
« July 9 1962 Bob Dylan records “Blowin’ In The Wind”
July 10 2012 China Daily Mail Headlines (July 5-10) »