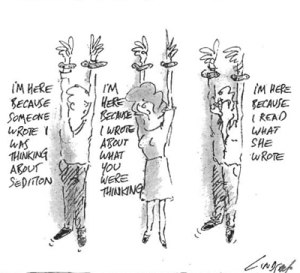 Australia is set to introduce compulsory internet censorship, supposedly to control access to anorexia and bulimia sites. It would appear only a matter of time before it is expanded to incorporate the new sedition laws, introduced in 2005.

Governments around the world and throughout history have always used a softening approach to introduce controversial, unconstitutional or downright illegal laws.  In this case, they are playing on the emotions of the population, saying such laws are to protect anorexics from themselves. It is only a matter of time before they decide that the public need protecting from a wide variety of matters, including political material that is deemed “unpatriotic”.

Australia is already seen internationally as lacking internet  maturity or sophistication.  With low internet speeds and high costs, and technology that lags behind the world, we are precluded from many services that other countries take for granted. In USA last year, for example, I had high speed access, with unlimited downloads, for just $29 month.  It was similar in China, no download restrictions by most companies, at affordable costs.

Now the government wants to restrict what we can access even more.  Such censorship would put Australia on a par with countries such as China, Cuba, Iran and North Korea.  I experienced such censorship when I was in China, and know first hand the effect lack of knowledge can have on a population.

The advent of information technology has generally been heralded as a force for the breakdown of authoritarian political control.  In days gone by, such governments seized printing presses and burnt books.  The internet made such practices futile.

However, about a decade ago, Singapore adopted a strategy of controlling the internet, by ensuring all ISPs connected through a government controlled server. In 1995, Singapore’s Second Minister For Foreign Affairs (now Minister), George Yeo, stated “censorship can no longer be 100% effective, but even if it is only 20% effective, we should not stop censoring.”

In September 1996, it became clear that Singapore had achieved much higher than this 20%.  ASEAN met in Singapore, and agreed to collaborate on finding ways to control the internet (Philippines was the only ASEAN member to reject such political control).

Even before this meeting, China had sent senior information official Zeng Jianhui to Singapore to learn about internet policing practices.  So had Vietnam.  After a brief period of blocking access to 137 sites in September 1996, Chinese officials followed the Singapore example of more selective restriction, and a greater reliance on the threat posed by the mere possibility of monitoring.

In Australia, this brings up the possibility of the use of the Anti-Terrorism (No.2) Act 2005. According to the Media Entertainment and Arts Alliance, the Act contains the largest legislative impediments to press freedom ever seen in Australia.  The laws allow police to hold a person for 48 hours without charge on mere suspicion of “terrorist activity.”  A journalist who reported such detention faces five years imprisonment, with no defence of “public interest” where a journalist reports miscarriages of justice.

In 2006, an academic who had been awarded an $829,000 Australian Research Council grant was warned by Attorney-General Ruddock that his proposed interviews with international terrorist leaders, as part of this research, would be in contravention of the anti-terrorist laws, even if such interviews happened outside Australia.  The academic was forced by the government to alter the framework of his research using the threat of these laws.

It remains to be seen how long before Australia expands it’s censorship of the internet to incorporate the anti-sedition laws, and to what degree.

Teacher and Writer. Writing has been cited in New York Times, BBC, Fox News, Aljazeera, Philippines Star, South China Morning Post, National Interest, news.com.au, Wikipedia and others.
View all posts by Craig Hill »
« Barack Obama May Not Be The Antichrist
City Of Goulburn »