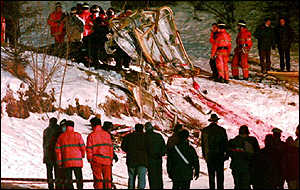 The cable car plunged 100 metres to the valley floor

On February 3, 1998, a U.S. Marine jet flying low over the town of Cavalese in the Italian Alps severed a ski-lift cable, sending a tram crashing to the ground and killing 20 people.

Cavalese is located in the Dolomite Mountains, about 20 miles northeast of Trento, Italy.

In 1976, 42 people there, including 15 children, lost their lives when the cable holding up their ski-lift car snapped.

The car fell 700 feet, with its overhead assembly landing on top of it. There was only one survivor–a 14-year-old girl.

On February 3, 1998, 20 Europeans, mostly Germans and Belgians, were taking a ski tram up Cermis Mountain when an EA-6B Prowler operated by the U.S. Marines suddenly flew by.

The anti-radar aircraft sliced right through the steel cable holding up the tram and it plunged more than 250 feet to the ground. Everyone on board was killed instantly.

The plane suffered minimal damage and returned to its base in Italy.

The pilot, Captain Richard J. Ashby, and navigator, Captain Joseph Schweitzer, destroyed a videotape that had recorded their flight before an investigation began.

Still, it was soon discovered that the plane had been flying at only 360 feet above the ground, in spite of regulations that set the minimum altitude for flights at 2,000 feet.

This revelation spurred large anti-American protests in Italy. President Bill Clinton apologized to the victims’ families and promised compensation, but, pursuant to NATO rules, the U.S. military claimed jurisdiction over the case, despite objections from Italian prosecutors.