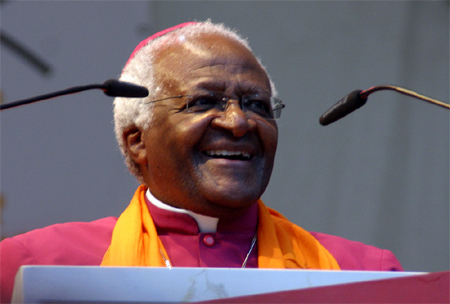 On September 7th 1986, Bishop Desmond Tutu became the archbishop of Cape Town, two years after winning the Nobel Peace Prize for his nonviolent opposition to apartheid in South Africa. As archbishop, he was the first black to head South Africa’s Anglican church.

In 1948, South Africa’s white minority government institutionalised its policy of racial segregation and white supremacy known as apartheid; Afrikaans for “apartness.” Eighty percent of the country’s land was set aside for white use, and black Africans entering this territory required special passes.

Blacks, who had no representation in the government, were subjected to different labour laws and educational standards than whites and lived in extreme poverty while white South Africans prospered.

Organised anti-apartheid protests began in the 1950s, and in the 1960s Nelson Mandela and other anti-apartheid leaders were imprisoned. In the 1970s, a new phase of protest began, with black trade unions organising strikes and Steve Biko, leader of the Black Consciousness movement, calling on blacks to defend their African culture.

After the Soweto uprising of June 1976, more than 500 black activists, including Biko, were killed by police. In the 1980s, protests continued, and the South African government resorted to strong-arm tactics, using the military and police to suppress opposition to white rule. Thousands of blacks were killed.

Meanwhile, a black Anglican minister named Desmond Tutu, who in 1975 became the first black dean of St. Mary’s Cathedral in Johannesburg, was emerging as an important leader of the anti-apartheid movement.

He advocated nonviolence and successfully pushed for international sanctions against South Africa. In 1984, he was awarded the Nobel Prize for Peace. The next year, he was installed as Johannesburg’s first black Anglican bishop.

When Desmond Tutu was elected the first black archbishop of Cape Town, he became the spiritual leader of nearly two million Anglicans in South Africa and more than a million others in neighbouring countries. In his new position, he continued his outspoken criticism of apartheid.

Desmond Tutu retired as Anglican archbishop in 1996, two years after majority rule came to South Africa with the election of Nelson Mandela and the African National Congress.