August 12 1939 The Wizard of Oz premieres in Oconomowoc, Wisconsin 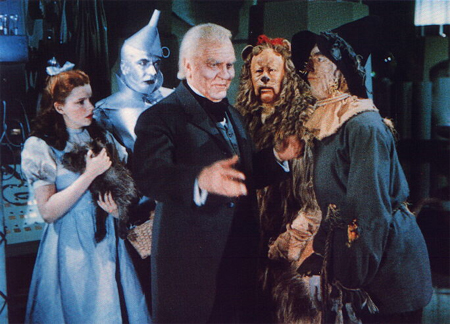 On August 12th 1939, The Wizard of Oz, starring Judy Garland and featuring words and music by E.Y. “Yip” Harburg and Harold Arlen, received its world premiere in Oconomowoc, Wisconsin.

The beloved characters and familiar plot points were mostly all there in the original children’s book, from the Kansas farm girl in shiny slippers transported to Munchkin land by a terrible tornado, to the wicked witch, the brainless scarecrow, the heartless tin woodsman and the cowardly lion she encounters once she gets there.

It was that year’s film adaptation, however, that earned Baum’s work a permanent place not only in cinema history, but also in music history.

Lyricist Yip Harburg and composer Harold Arlen were both seasoned songwriting professionals before teaming up in 1938 to write the original songs for The Wizard of Oz, though they had worked together very little. Harburg’s best-known credits to date were “Brother, Can You Spare A Dime?” (1931) and “It’s Only A Paper Moon” (1933), and Arlen’s were “Get Happy” (1929) and “Stormy Weather” (1933).

Their first collaboration was on the Broadway musical Hooray For What! (1937), which yielded the now-standard “Down With Love.” The success of The Wizard of Oz, however, would quickly overshadow those earlier accomplishments.

Not only did Judy Garland’s signature song, “Over The Rainbow,” earn Harold Arlen and Yip Harburg the Oscar for Best Song at the 1940 Academy Awards, but it quickly became an indispensable standard in the American Songbook, later being acknowledged as the #1 song on the “Songs of the Century” list compiled in 2001 by the Recording Industry Association of America and the National Endowment for the Arts.

First and foremost, however, Arlen and Harburg’s songs accomplished their primary goal with flying colors, carrying and deepening the emotional impact of the story in the film for which they were written. As innovative and impressive as the production values of The Wizard of Oz were in 1939, it is impossible to imagine the film earning the place it has in the popular imagination without songs like “The Lollipop Guild,” “If I Only Had A Brain” and “We’re Off To See The Wizard.”

4 thoughts on “August 12 1939 The Wizard of Oz premieres in Oconomowoc, Wisconsin”