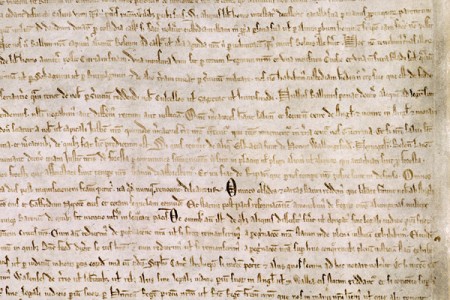 On June 15th 1215, following a revolt by the English nobility against his rule, King John put his royal seal on the Magna Carta, or “Great Charter.” The document, essentially a peace treaty between John and his barons, guaranteed that the king would respect feudal rights and privileges, uphold the freedom of the church, and maintain the nation’s laws.

Although more a reactionary than a progressive document in its day, the Magna Carta was seen as a cornerstone in the development of democratic England by later generations.

John was enthroned as king of England following the death of his brother, King Richard the Lion-Hearted, in 1199. King John’s reign was characterised by failure. He lost the duchy of Normandy to the French king and taxed the English nobility heavily to pay for his foreign misadventures. He quarrelled with Pope Innocent III and sold church offices to build up the depleted royal coffers. Following the defeat of a campaign to regain Normandy in 1214, Stephen Langton, the archbishop of Canterbury, called on the disgruntled barons to demand a charter of liberties from the king.

In 1215, the barons rose up in rebellion against the king’s abuse of feudal law and custom. John, faced with a superior force, had no choice but to give in to their demands. Earlier kings of England had granted concessions to their feudal barons, but these charters were vaguely worded and issued voluntarily. The document drawn up for John in June 1215, however, forced the king to make specific guarantees of the rights and privileges of his barons and the freedom of the church. On June 15, 1215, John met the barons at Runnymede on the Thames and set his seal to the Articles of the Barons, which after minor revision was formally issued as the Magna Carta.

The charter consisted of a preamble and 63 clauses and dealt mainly with feudal concerns that had little impact outside 13th century England. However, the document was remarkable in that it implied there were laws the king was bound to observe, thus precluding any future claim to absolutism by the English monarch. Of greatest interest to later generations was clause 39, which stated that “no free man shall be arrested or imprisoned or disseised [dispossessed] or outlawed or exiled or in any way victimised…except by the lawful judgement of his peers or by the law of the land.” This clause has been celebrated as an early guarantee of trial by jury and of habeas corpus and inspired England’s Petition of Right (1628) and the Habeas Corpus Act (1679).

In immediate terms, the Magna Carta was a failure–civil war broke out the same year, and John ignored his obligations under the charter. Upon his death in 1216, however, the Magna Carta was reissued with some changes by his son, King Henry III, and then reissued again in 1217. That year, the rebellious barons were defeated by the king’s forces. In 1225, Henry III voluntarily reissued the Magna Carta a third time, and it formally entered English statute law.

The Magna Carta has been subject to a great deal of historical exaggeration; it did not establish Parliament, as some have claimed, nor more than vaguely allude to the liberal democratic ideals of later centuries. However, as a symbol of the sovereignty of the rule of law, it was of fundamental importance to the constitutional development of England. Four original copies of the Magna Carta of 1215 exist today: one in Lincoln Cathedral, one in Salisbury Cathedral, and two in the British Museum.