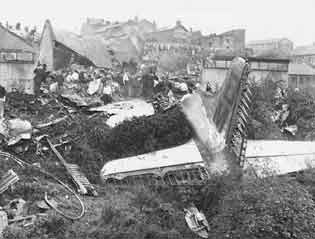 On March 27th 1977, on the runway at a Canary Islands airport, two 747 jumbo jets crashed into each other,  killing 583 passengers and crew members. The crash still stands as the worst in aviation history.

The airport was the Los Rodeos Airport on Santa Cruz de Tenerife. The Boeing 747s were both charter jets that were not scheduled to be at their that day. Both had been diverted from the Las Palmas Airport, after a group of militants had set off a small bomb at the airport’s flower shop earlier that day. The first plane was a Pan Am charter carrying passengers from Los Angeles and New York to a Mediterranean cruise. The second was a KLM charter with Dutch tourists. Both were diverted to Santa Cruz that fateful day.

The Los Rodeos airport is infamous for its sudden fog problems and was not a favourite location for pilots. At 4:40 p.m. on a typically foggy afternoon, the KLM jet was cleared to taxi to the end of the single main runway. The Pan Am jet followed behind it and was to wait in side space while the KLM jet turned around to begin takeoff. However, in the fog, the Pan Am pilot was unable to keep the KLM jet in sight and did not move into the proper position. The Dutch crew of the KLM jet, possibly unable to understand the accented English spoken by the flight controllers, began to take off down the runway before the Pan Am jet was able to move to the side space.

At the last minute, the Pan Am pilot saw the other 747 coming straight at his own jet and screamed “What’s he doing? He’ll kill us all!” He attempted to swerve into a grassy field, but it was too late. The KLM 747 slammed into the side of the Pan Am jet and both planes erupted into a huge fireball. The only survivors on either plane were those in the very front of the Pan Am 747. Survivor Lynda Daniel later said of the disaster, It exploded from the back. Most of the people in the first six rows made it.

The investigation concluded that the fundamental cause of the accident was that Captain Van Zanten (KLM) took off without takeoff clearance. The investigators suggested the reason for his mistake might have been a desire to leave as soon as possible in order to comply with KLM’s duty-time regulations, and before the weather deteriorated further.

Other major factors contributing to the accident were:

The following factors were considered contributing but not critical: