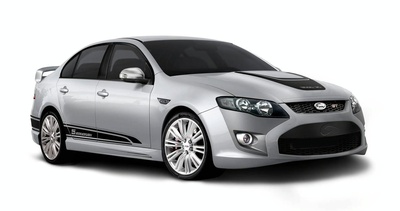 Interior-wise, the driver will wrap his/her hands around a sports leather steering wheel with cruise control mounted switches while all occupants will enjoy the comfort of dual-zone temperature control air conditioning, power front and rear windows, alloy pedal covers and a premium audio system with six-disc in-dash CD plus the all-important iPod integration.

Ford Performance Vehicles (FPV) today celebrated its fifth year of production with the release of the FPV 5th Anniversary model at the Australian International Motor Show in Sydney.

“In recognition of this milestone we are launching a vehicle which will ensure this tradition continues.”

With only 200 units available, the FPV 5th Anniversary will join an iconic stable of collector’s vehicles, including the 40th Anniversary GT and the Cobra.

The traditional sports seats are finished in Nudo Leather as standard with a 5th Anniversary logo embossed into the front headrests.

The FPV 5th Anniversary offers over $9,600 worth of additional features for a premium of only $5,300 over the Recommended Retail Price of an FPV GT sedan.

The Recommended Retail Price for the FPV 5th Anniversary is $71,890